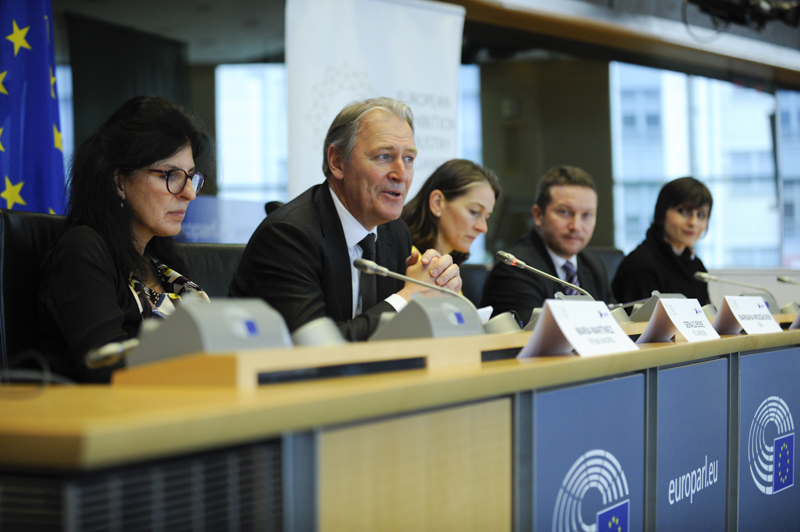 The European Exhbition Industry Alliance organises events in Brussels to exchange with the European Insitutions and discuss current issues, needs and policy proposals.

A common theme in all EU speakers’ presentations was a clear commitment to Free Trade as the only means to maintain Europe’s economic position: to facilitate growth, wealth, and respect of EU democratic values, and to help foster stable and reliable political relations for the European Union.
EEIA (European Exhibition Industry Alliance) and AUMA (Ausstellungs-und Messe-Ausschuss der Deutschen Wirtschaft, Association of the German Trade Fair Industry) have launched a new “Exhibition Industry EU Dialogue” event format in Brussels, with 50 participants from all over Europe coming together for this first event.
EEIA and AUMA co-organised the event, which was open to all AUMA, EMECA (European Major Exhibition Centres Association) and UFI (The Global Association of the Exhibition Industry) members from Europe.
The EU Dialogue event took place in the European Parliament and was hosted by MEP Istvan Ujhelyi, Vice Chair of the Committee on Transport and Tourism.
The aim was to gain and discuss fresh insights on recent EU policy areas, programmes and the latest political developments.
“We wanted to create synergies between various meetings by offering participants the chance to meet and have a shared dialogue with EU representatives, at a single occasion in Brussels”, explained Gerald Böse, CEO Kölnmesse, Chairman of the UFI European Chapter and Member of the AUMA Executive Committee.
María Martinez, Member of the Management Board of IFEMA Madrid (Institución Ferial de Madrid) and EMECA Vice President, added that “this open dialogue exchange with representatives from different EU institutions and players within the exhibition sector, right in the heart of democratic Brussels, helps both sides to achieve deeper mutual understanding and supports the communication of our industry’s goals and needs”.
The first part of the event was dedicated to the EU’s approach to tourism and new “Destination Europe” initiatives such as the EU-China Tourism Year 2018. Istvan Ujhelyi (MEP) and Iuliana-Gabriela Aluas (European Commission DG GROW) explained the EU’s visibility and promotion strategies, designed to increase the number of international travellers to Europe.
The exhibition industry representatives made the point that, not only does the exhibition industry play an important role in attracting international business travellers with high spending budgets, it also creates positive economic impacts at local, regional and national levels. Furthermore, the exhibition industry was recognised by the EU representatives as an innovative sector and they invited it to participate as a key industry in the activities.
The second part of the event was dedicated to SME internationalisation and economic diplomacy. Philippe de Taxis du Poët (European Commission DG GROW) explained the background of the increasing EU efforts in this field to support European companies, especially SMEs, to successfully internationalise, whilst promoting European values and democratic rules.
The EU encourages complementarity with Member States’ programmes to achieve greater effects. On a practical level, DG GROW supports SMEs with a number of programmes, which were outlined by Jean-Marie Avezou (European Commission, DG GROW). He mentioned the Enterprise Europe Network as the central support network, along with numerous more targeted programmes. Given the complexity and high number of initiatives, the Commission is aiming not only at being more transparent, but also at making its help for companies simpler and easier to access.
Exhibition participants emphasised that Trade Fairs are the natural starting point for internationalisation, and the Commission agreed that more Trade Fair initiatives should be implemented.
Barbara Weizsäcker (EEIA) explained the synergies created in the “Business Beyond Borders” (BBB) project which has just launched its first out of ten business matching events at trade fairs at Genera in Madrid. Through the integrative approach and the partnership between Eurochambres and the European exhibition organisers right from the planning phase onwards, BBB has achieved an impressive participation rate and conferred numerous benefits on participating companies, up to and including diplomatic representation.
The third and final part of the event, the EU’s trade strategy and latest developments concerning Free Trade Agreements, was presented by Lutz Güllner (European Commission, DG TRADE). He stressed the fact that in view of the globally integrated production and value chains protectionism does not make sense.
This was followed by spotlights on several regions of strategic importance.
Jean Blatz (European Commission, DG Trade) referred to the loss of 35-40% of the market with Russia in the last years due to protectionism, while stressing Russia’s importance on trade and its role as a strategic partner.
The UK Ambassador, Angus Lapsley, praised the EU as the most constructive player on the global trade scene and confirmed that the UK is committed to remaining constructive in the future, whatever the final UK exit agreement entails.
Susan Danger (AmCham EU), who represents US companies committed to trade in Europe, added that their priority was to maintain transatlantic relations with a strong and united EU. Instead of focussing on the problems, she called for a positive narrative and a joint effort to concentrate on the EU’s assets and achievements.
Dinner speaker Elmar Brok, MEP and long-standing Chairman of the Committee on Foreign Trade, warned that only a strong EU will be able to give the proper answers to citizens and take strong decisions for the economy when uncertainties arise from outside. In his view, single Member States will not be in a position to successfully negotiate trade agreements with economic powers like the US or China.
Trade Fairs and exhibitions offer innovative and effective platforms for trade every day in Europe and worldwide. “The European exhibition industry is a key service industry for businesses of all sectors, and we strongly believe in a successful future under democratic rules and with open and fair markets” concluded Barbara Weizsäcker (EEIA), speaking in the name of all those present at this event.
It was agreed that the Exhibition Industry EU Dialogue generated significant interest and that the cooperation will be continued in the future.

About AUMA
AUMA, the Association of the German Trade Fair Industry, represents the interests of organisers, exhibitors and visitors on a national and international level in dealings with parliament, ministries and other organizations, informs exhibitors and visitors about exhibitions worldwide, supports the international marketing of the German organisers, conducts marketing pro trade fair. Additionally, AUMA maintains the Institute of the German Trade Fair Industry, improves the transparency of the trade fair market and coordinates the German participations at foreign fairs. For more information visit: www.auma.de

About Business Beyond Borders
Business Beyond Borders, is a new European Commission initiative to help businesses, in particular SMEs and Clusters, to operate internationally with the ultimate goal of increasing economic growth within and outside Europe. Support will be provided to companies participating at international fairs by establishing a series of Business to Business (B2B) and Cluster to Custer (C2C) matchmaking events and by supporting the development of the companies’ activities in target markets (Australia, South Africa, India, Chile, Iran, among others). All details at: