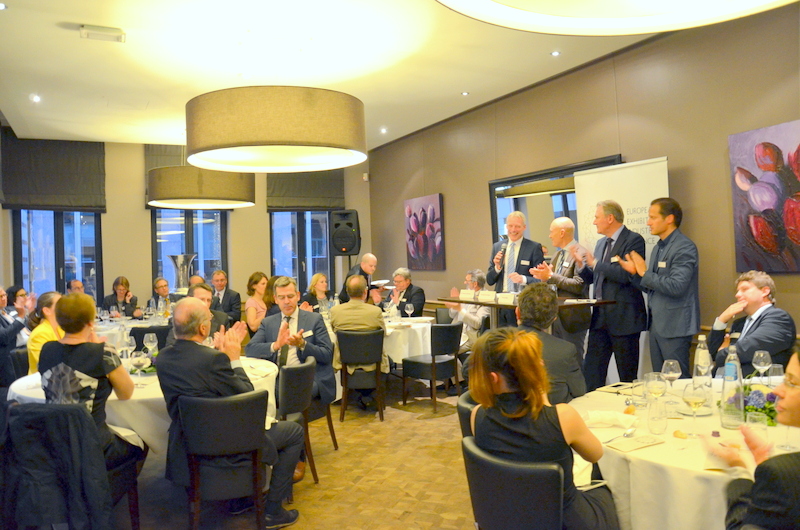 2014 Dinner Debate for EU stakeholders in Brussels with Key Note by Dr. Werner Hoyer, President of the European Investment Bank

On 10 July 2014, the European Exhibition Industry Alliance held a Dinner Debate for EU stakeholders in Brussels. Dr. Werner Hoyer, the President of the European Investment Bank (EIB) opened the evening with a Key Note. The European Exhibition Industry Alliance was represented by leading UFI and EMECA members Andreas Gruchow of Deutsche Messe Hanover, Corrado Peraboni of Fondazione Fiera Milano, Gerald Böse of Koelnmesse and David Boon of Brussels Expo. They promoted the exhibition industry’s role, impact and needs on a panel. Core arguments were the European exhibitions leading position in global industry, their role as trade facilitator, most effective marketing tool, innovation and competitiveness booster and the important social economic impact of exhibitions in the regional and national level.

Both the panel and representatives of the European Commission suggested intensifying exchange and cooperation to better coordinate EU-measures, particularly those directed at SMEs and to connect them with trade fairs, such as the Enterprise Europe Network activities or the Missions for Growth. The exhibition industry representatives underlined the importance of open markets and stated their support for Free Trade Agreements to set clear rules. Concerning the practical measures supporting global business activity, they argued for a balanced approach between export-oriented outgoing initiatives like missions to emerging markets worldwide and effective measures to be implemented in Europe such as hosted international buyers’ programmes on European exhibitions to support the internationalisation of SMEs.

In his Key Note, the President of the EIB named the major challenges for the European economy from the EIB viewpoint such as the productivity gap, new strong competitors, R&D and innovation gaps, shorter innovation cycles and digitization. Dr. Hoyer underlined the great need for investments in the EU. New instruments and increased financing volume of the EIB reflect this situation and focus particularly on investment or risk finance for R&D, innovation and SMEs. “The EIB instruments will be pooled and blended with EU funding and EU initiatives. We also have to increase promotion of these growth-oriented measures”, Dr. Hoyer concluded.

“During the lively discussion it became clear that there is significant potential for further cooperation between the exhibition industry and the institutions of the EU, utilizing the contribution and impact that exhibitions have on the industries and businesses they serve”, summarises Barbara Weizsäcker, Secretary General of the European Exhibition Industry Alliance.